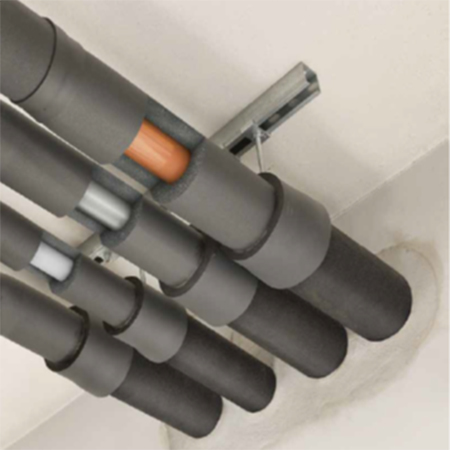 “Mandating effective fire stopping in all construction projects can dramatically reduce fatalities and injury from smoke and hot gas inhalation. To put this into context the annual number of fatalities recorded from July 2016 to June 2017 was 346. These figures would be higher still without fire stopping measures to allow people safe passage out of the building.

Buildings are sub-divided into a number of discreet compartments using fire rated walls and ceilings in order to prevent the passage of fire from one cell to another, as set out in Building Regulations’ Approved Document B. The primary role of a fire compartment is to protect the means of escape for a given amount of time, typically 30, 60, 90 or 120 minutes.

Despite the fire protection regulations to design, construct and maintain buildings to prevent the outbreak of fire and spread of smoke, it is still relatively common to find apertures in walls that haven’t been effectively firestopped. Holes made for mechanical and electrical services often remain incorrectly sealed and this is an issue in both new buildings and existing buildings where changes to M&E pipework are made.

Complicated layouts and lack of awareness of the location of fire compartments will mean that the building doesn’t achieve the required degree of containment, allowing the fire to spread to other areas. Specifically, it will reduce the time that people have to evacuate the building and allow smoke, toxic gases and eventually the fire itself to spread into access corridors and stairwells that lead out of the building.

Passive fire protection systems effectively compartmentalise a building by creating fire-resistant walls, floors and ceilings with 30 minutes up to 120 minute protection. It is the integrity of these compartments that the occupants rely on when they are making an emergency evacuation from the building.

Until recently it was perceived that pipe insulation and fire stopping materials were separate elements in a fire compartment. There is however the option to specify a thermal insulation with fire stopping performance. Choosing closed-cell insulation with intumescent properties and sealing the gaps around the aperture is an effective way of ensuring the fire is contained. It also means that the HVAC pipework achieves the required level of energy efficiency along its entire length.

Closed cell insulation is capable of protecting penetrations for both non-combustible and combustible pipes in ceilings, solid walls or lightweight walls. An added advantage is that it is capable of achieving reliable fire protection in all structural elements without any complicated additional measures for installers. For example, when ArmaFlex Protect is used, the gap around the pipework can be closed with conventional mortar or filler because the closed-cell insulation incorporates intumescent material that expands to 20 times its initial volume in the event of a fire, and is fire resistant up to EI 120. At the same time, the closed-cell properties of the insulation ensure effective thermal insulation and reliable condensation control along the entire length of the pipe.

It is important to have a system-based approach when it comes to the integrity of fire compartments, which extends to a sealing mortar for the annular gap and fire collars. Our non-combustible firestop mortar has a melting point of >1,000 °C and not only ensures reliable and effective fire protection, but protects the pipes against heat losses and prevents noise being transmitted to adjoining structural elements. Fire collars are an effective part of a firestopping system approach too, and are suitable for fire penetration seals around plastic pipes with or without fire rated, closed cell insulation.

The steel collars are lined with an intumescent material that expands in a fire, forming a lasting hermetic seal. The pipe collar can be used for sealing single or multiple combustible pipes and multi-use plastic beverage tubes (pythons) in refrigeration, air-conditioning, hot and cold-water applications. Collars such as this are easy to install, being simply laid around the pipe which is to be sealed before being fixed in place.

As buildings become larger or more complex, ensuring the integrity of fire compartmentation can potentially be a matter of life and death for the occupants. High rise residential and commercial buildings are a good example of where reliance is placed on fire compartmentation, and it is common for each apartment, floor or unit to be treated as its own 'cell'.

Retaining the integrity of these fire compartments is the first line of defence against the spread of fire. To ensure this is done effectively, a closed cell insulation with intumescent properties, installed as part of a system that includes mortar fillers and pipe collars, is one of the best ways of protecting ‘means of escape’ routes.”

As the inventors of flexible foam for equipment insulation and a leading provider of engineered foams, Armacell develops innovative and safe thermal, acoustic and mechanical solutions that create sustainable value for its customers....
View company profile
Send Enquiry Make an enquiry to Armacell

Make an enquiry to Armacell

You may also be interested in this related Product News: What’s new with Knauf Insulation [BLOG] Read Now