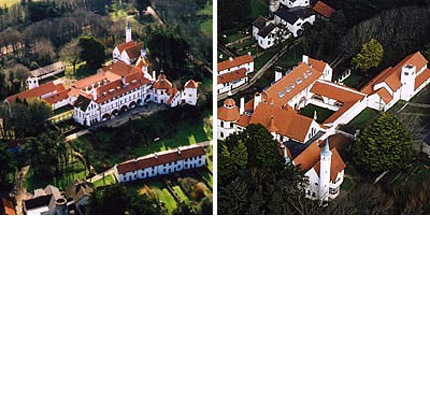 When roofing contractors have to buy their own boat to get to a job, there must be something special about the project. The location was Caldey Island, some three kilometres and a half-hour boat journey off the Pembrokeshire coast, and the project, the magnificent Caldey Monastery.

With the island's monastery building approaching its centenary in the closing years of the 20th century, many of the materials used in the construction were reaching the end of their life. Without major capital investment, the future of the monastery and of the monastic community was in doubt.

Well intended but ill-advised repairs had seen the gradual erosion of much of the architectural quality of the building, including the replacement of pitched roofs over some dormers with flat roofs; the loss of gallows, bracketed gutter supports and open eaves; and the loss of chimneys, finials and pots.

In addition, the inaccessibility of much of the roof due to its height had restricted maintenance over the years. Inappropriate materials and detailing during the original construction process exacerbated the deterioration of some elements of the building, for example the lack of counter battening for the roof tiles.

Says architect, Peter Holden of Acanthus Holden Architects based in Pembroke: "The original roofing was in very poor condition with tiles lifting in the wind and blowing off, nails corroded away, water coming in, and lead work at the end of its life. From a conservation point of view, it was decided that any work that was done should offer an extended life with minimal maintenance, and that all the roofs on the monastery, including the lead roofs, should be relaid."

The monastery was originally designed by Cardiff architect John Coates Carter under the direction of Abbot Aelred Carlisle. Carter was a pupil and then partner of the leading High Victorian Gothicist, John Pollard Seddon, and very much influenced by Seddon's love of curves, turrets and towers, as well as his interest in modern construction methods, including concrete. It was from the High Victorian Gothic Revival movement that the Arts and Crafts movement grew; Caldey Monastery being one of the best examples of Arts and Crafts architecture in the UK, and certainly the best known and most significant in Wales.

The island, which is one of Britain's holy islands, is known for its peace and tranquillity, and the magnificent architecture of the monastery which is now a Grade II listed building.

Carter's work on the monastery - which includes daring technical innovation in the use of concrete - is romantic and fantastical but at the same time practical, with its turrets, towers and roofs looking particularly picturesque from the north-west approach. It was the pinnacle of Carter's career, during which he designed some of the most important Arts and Crafts influenced buildings in Wales.

The re-roofing of the monastery presented a number of challenges - not least problems of accessibility to the island, often made more difficult and sometimes impossible by the changeable weather. A suitable replacement also had to be found for the original tiles which were a mix of Double Romans and Plain Tiles made of alluvial clay in a striking Orange colour. As far as the architect, Peter Holden, could ascertain, Double Romans in clay were no longer manufactured either in this country or in Europe.

Instead he turned to the team of craftsmen at Sandtoft Roof Tiles who can combine its extensive knowledge of the properties of clay with the use of computer-aided design and digital mapping techniques to reproduce unusual and historical roofing products long out of production.

Sandtoft had already been involved on a previous project on the island when the roofs of the post office and some cottages were letting in water and considered unfit by the Pembrokeshire County Council Environmental Health Department. These were replaced using Sandtoft Flemish and Humber roof tiles in Flanders Red.

That project was supported by a grant from Pembrokeshire County Council. The monastery re-roofing was grant aided by the Heritage Lottery Fund and Cadw, the Welsh equivalent of English Heritage.

For the monastery, Sandtoft supplied a combination of about 36,000 Humber Plain Tiles and 15,000 Single Roman Tiles - a smaller version of the Double Roman but the same shape and colour as the original tiles.

In addition, the arris hips on the monastery, over 900 in total, had to be individually hand-made to suit the roof.

Says Nigel Dyer, Sandtoft's Heritage Products Designer, who worked with Alan Lines, Heritage Services Manager, on the project: "We had to take samples from the site and make a mock roof section to see how the samples sat on it. Tiles on an old building are not as exact as on new buildings, and so the arris hips had to be made to fit the roof.

"The look, character and style was very important, and of course we had to match the exacting standards of bodies such as Cadw. We used metal tins to make the tiles and then samples were approved on site. It was very labour intensive and sometimes the metal tins had to be specially made. We could make just ten tiles a day which then had to dry overnight with a further ten made the next day.

"Most normal buildings have a 90 degree corner, but the monastery had a lot of octagonal roofs with 135 degree corners. We also had to work with eight different pitches and two different splay angles."

These challenges were compounded by the fact that a lot of the liaison work had to be done over the phone and from drawings because of the difficulty of getting to the site - a 7 hour journey from Sandtoft followed by a half-hour boat trip, weather permitting.

A good relationship with the roofing contractor Randell and Janes Roofing was essential. Nick Randell, of Randell and Janes, takes up the story: "The monastery is in a very exposed position on a hill, and although we were able to work up to 10 hours a day in the summer, the winter weather was far more difficult to deal with. Handling the old and new lead - approximately 6 tonnes was used - was a very challenging part of the job due to its very heavy weight.

"The monks themselves had a crane that we were able to borrow and we had a telescopic handler which was very useful. We also had a lot of help from the islanders weatherwise - they would listen in on their radios to the forecasts and would tell us if the weather was about to change."

Six to eight contractors were working on the island most of the time during the 2-year life of the project - although it could be up to ten. They lived on the island during the week in rooms above the post office, going home at weekends. The problem of transporting 30-40 tonnes of building materials across the sea to the island was solved using amphibious vehicles and the post boat, the Abbey II. However, the cost of paying for boat trips for the men to and from the island became too prohibitive so Nick Randell and his partner, Mark Janes, seized the initiative and bought their own boat - an inflatable with a rigid hull (R.I.B.) - which turned out to be a far more cost-effective option.

Says Nick Randell: "Many of the roofs on the monastery were curved, making them very unusual and difficult to work on, and there were also pitched dormers to contend with. For some parts of the roofing we were working from old photographs, in addition to the architect's drawings, to make sure the finished result would be as near to the original as possible."

And, says architect, Peter Holden, that's exactly what has been achieved: "The monastery now looks spectacular - and the monks are overjoyed with the final result."

You may also be interested in this related Case Study: Heavy 3 Slate Provides The Key To Scottish Bothy’s Grand Renovation Read Now