The top deck of the 25-year-old podium car park at Edinburgh College’s Granton Campus, was extensively cracked with ponding water evident. With concerns about water ingress into the lower level of the car park, causing long-term damage to the structure, action was required.

A project to improve the falls and drainage was undertaken in 2020, with waterproofing and protection works following in 2021.

The car park deck is of composite design, formed with precast Bison-type concrete planks with a structural reinforced concrete topping, all supported by a steel frame. Since construction, the bare concrete finish was unprotected and at risk from the extremes of weather in this region.

The structure was subject to large amounts of movement, with cracks visible in the structural reinforced concrete topping. These were evident at the longitudinal sides of the precast 1.2m wide concrete planks and supporting beams. Deflections within the precast units, rotation over beams and differential properties between the individual precast units typically result in dynamic cracking over beams.

Inspection here showed that there was evidence of cracking on every plank, and lateral cracks were also visible.

Triflex worked in conjunction with the Fraser Bruce Group to install a cold liquid applied, rapid curing waterproofing and protection system. The Triflex ProPark® fully reinforced system was specified due to its long-term protection capabilities, together with its heavy duty dynamic crack bridging properties.

The system is specifically designed for external decks at high risk of cracking, is BBA and ETA certified and delivers the highest class of dynamic crack bridging under EN 1504-2 at B 4.2 (-20°C). The Triflex ProPark system consists of a Triflex concrete primer, Triflex ProPark reinforced waterproofing (single process), a waterproof wearing layer with Triflex Quartz 0.7 - 1.2mm, and a Triflex coloured, abrasion resistant surface finish.

The car park surface consisted of a series of compound falls. A ridge line runs along the centre of the car park, falling each side down to the gulley positions. The multiple cracks were locally reinforced with a 200mm wide strip of Triflex ProPark, extending a minimum of 75mm either side of each crack.

The system’s dynamic crack bridging properties meant it will deal with further movement and prevent water ingress to the decks below, providing waterproofing and protection for years to come. The Triflex ProPark system was continually applied, including over the previously reprofiled gulleys.

Rapid durability with PMMA based system

A short programme of works was required for the protection and waterproofing project. As each layer of the liquid system cured in typically less than an hour, this contributed to the efficient and on time project delivery. On the two-car park ramps the system also included a Triflex Emery 1.0 - 3.0mm providing a hard wearing and robust anti-skid surface with high PTV. The system is unaffected by ponding water and is resistant to chlorides (road salts), carbon dioxide ingress, petrol, diesel, brake fluid, engine oil, battery acid, and de-icing and cleaning products, ensuring that it will provide protection to the car park for years to come.

The works took place in the summer of 2021, and one of the challenges was nesting seagulls nearby. This meant that to reduce the impact of seagull waste, seagull sonar units were installed and additional care was taken to clean surfaces with Triflex Cleaner before any subsequent Triflex system application. The durable surface finish of the cold liquid applied PMMA Triflex ProPark system incorporated colours of Traffic grey for the drive aisles, with parking areas in Traffic blue. Bay marking was completed with white Triflex Preco Line 300, and direction arrows completed with white Triflex Cold Plastic, a PMMA system capable of withstanding the rigours of heavy traffic.

Protection at the details

Trafficable within hours, the rapid curing systems meant that the project could be completed quickly, with minimal disruption, enabling a full reopening soon after completion. 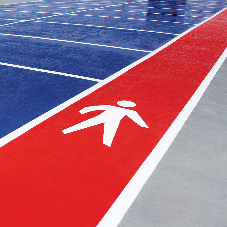 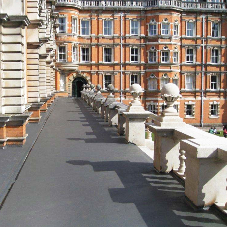 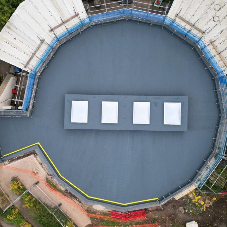 You may also be interested in this related Case Study: KEMPER SYSTEM PRESCRIBED FOR MULTI-MILLION-POUND HOSPITAL BUILDING Read Now