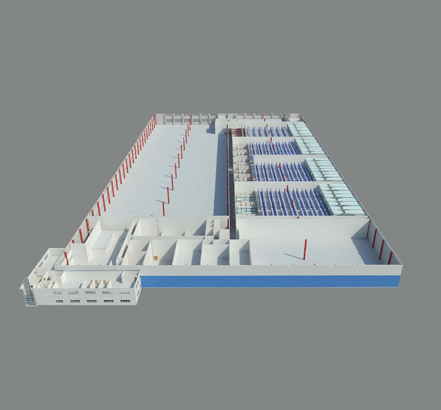 Fläkt Woods technology is being used by IT services supplier, EDS, helping the company to leverage free-air cooling, saving it thousands of pounds a year by chilling the air within their new £30 million data centre in Wynyard near Billingham on the Teesside business park.

With the rising cost of energy, and mounting concern over the IT industry’s contribution to carbon emissions, EDS’ new data centre design sets a new standard for data centres and will be one of the largest and most environmentally friendly in Europe.

The new centre will be the first of its kind in the country to use this new state-of-the-art cooling method. It is the size of four football pitches, and will house sensitive data on 7,000 computers. Its design allows for the direct cooling of IT equipment and plant rooms using the external cool air associated with the North East of England. This will result in an anticipated annual energy saving of 40% compared to a typical data centre design.

Wynyard is able to reduce the cost of cooling in its facility through a number of novel design adaptations. Recognising that cooling was the most significant opportunity for energy saving, to aid the design of the building, the weather data was analysed for the Billingham area going back 100 years, on an hour-by-hour basis.

As a result, eight 2.6m diameter variable speed axial fans, provided by Fläkt Woods, have been installed in each hall to be used to supply air and another eight used for exhaust air, in an N+2 arrangement (making 64 in total). A mixing chamber is also included to re-circulate air to maintain conditions in the pressurised plenum below the computer equipment and 8,100m2 of technical space at an average capacity of 2,260w/m2.

The building contains humidification and cooling coils to tune the outside air condition and remove contaminants. These measures offer the potential to improve the Data Centre Index of Efficiency from 57 to over 85%, yielding annual energy savings of 4.1GWh (per pod at 1kW/sq m) while providing three times the amount of computation per unit of IT power.

Data centres can be the single largest source of electrical power consumption and carbon emissions for large corporations. Traditional data centres on average use several thousand megawatt hours per year. If data centres were classed as a separate industry, they would be the sixth-largest user of electricity.

In a typical data centre, 25-30% of the power consumed goes towards cooling the computers. This figure continues to rise, thanks mainly to the spread of volume servers, which now cover around 90% of the installed base, as well as growth in the average amount of energy that servers consume.

Although manufacturers are working on energy-efficient servers, this is not enough. The gains they make cannot balance this kind of growth in energy consumption. By 2011, the average UK data centre is expected to spend around £11m ($15.33m) a year on cooling IT systems, equipment and plant rooms.

“We hope that making the industry aware of what we have achieved at Wynyard will set a new standard for data centres around the world,” said Sally Poynter, EDS Data Centre Services Lead. “When Wynyard is completed it will be one of the largest data centres in Europe, but will achieve costs and energy savings on a different level from other data centres.”

Air-side economisation, an American term for sucking in outside air to cool data centres, has already been tried and tested in the US. “It seems incredible that we haven’t used it in the UK before”, says Paul Wenden, Engineering and Product Management Director at Fläkt Woods, “Why waste all that money battling 120°F heat flowing out the back of your servers when you could easily vent that air and have a fresh supply of nice cold air coming in from outside” adding “as server room cooling easily consumes up to half of your server room’s total energy use, this is a logical green initiative for the sector”.

“We simply change the AC unit air intake to accept air from outside”, said Paul “not inside the server room. This creates positive pressure inside the server room and keeps the AC unit in-line so when the air outside gets too warm, the AC unit’s built in thermostat will kick on the compressor and start actively cooling the incoming air”. Add a vent to exhaust the hot air from the servers back outside and you have created an external air cooling system that only uses the AC unit’s compressor when the air outside gets too warm.

EDS is the Government’s biggest IT services supplier and it also has private sector clients including British Airways, BP, Rolls-Royce and Royal Bank of Scotland.