This blog was written by Franke Sissons Ltd.

Of all the sectors washroom designers work in, perhaps the most complex is education. After all, what can a four-year-old pre-schooler and a 25 year old post-graduate research student possibly have in common? The answer is, practically nothing – apart from the need to visit the toilet several times a day.

Yet those who specify products and design washrooms for education are expected to understand the needs of both equally well, along with every age group inbetween.

Of course, certain things are recommended across the board, such as robust fixtures that can withstand bumps, push button taps that shut off automatically to save water and DocM products and accessories that are designed to make accessible washrooms stylish.

A look at our range of products for the education sector will tell you Franke’s designers have thought long and hard about the challenges of designing washrooms for different age groups.

But we still find ourselves answering wider questions on the fundamentals of washroom design for children and young adults – many of them around issues of safety, privacy, security, health and diversity.

So in this blog, we take a closer look at the factors influencing washroom design in three key areas – pre-school & primary schools, secondary schools and higher education.

Where very young children are concerned, washroom design is chiefly about building on the work done by parents and nurseries to toilet train and encourage good personal hygiene.

That means drawing on the principles of learning by play to make every washroom visit as much fun as it can be. Research and experience has told us curvy shapes and cheery primary colours make for a much friendlier washroom through the eyes of a 4 year old, hence the distinctive ‘wavy’ design of our Washino Wash-and-Play trough. 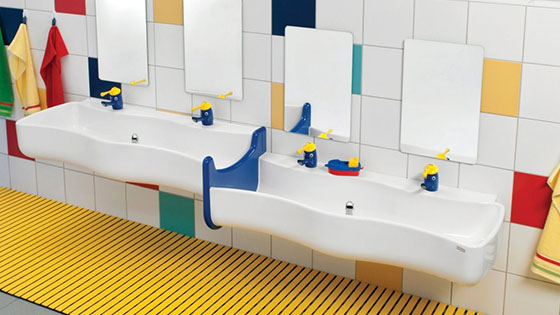 Because children play and learn better together, Washino also has four side by side wash places: two in each trough which are, in turn, offset vertically by 100mm so they can pick the height that suits them best.

Brightly coloured tiles, mats and cubicles will add to the sense of fun, distracting children from the idea that going to the toilet is a test they have to pass and turning into a much more playful experience.

Remember as well that transitioning from supervised to unsupervised toilet visits is a huge boost to maturity and self-confidence at this age, so any proposed washroom design should provide as safe a space as possible for children exploring their new found independence.

Sharp corners and edges in any form are obviously a ‘no-no’ – another reason our moulded Wash-and-Play troughs are so popular in primary schools.

Other safety considerations include cubicle locks that are easy for small hands operate; TMV3 taps or valves to prevent scalding; and non-slip floor surfaces to reduce the risk of falls, even when they’re wet.

By the age of 11 or 12, there is a whole range of new considerations to factor into washroom design. Among them the problems of vandalism, bullying, privacy and gender identification.

While primary school children can break or damage fixtures through sheer exuberance, damage to secondary school washrooms is usually of the more malicious kind.

As a result, robust design and ‘vandal proof’ materials are a given in any secondary school washroom spec, with composites and stainless steel offering more durable alternatives to ceramics for hand wash basins and toilets.

Examples include the Franke range of washtroughs and basins seamlessly moulded in Miranit, an advanced resin and granite composite. Several times stronger than ceramic, highly impact-resistant and virtually shatter-proof, Miranit is ideally suited to the challenging environment of the high school washroom. Along with other products such as satin polish stainless steel urinals and WCs, it allows for a washroom design that is stylish and welcoming without compromising on strength and durability. 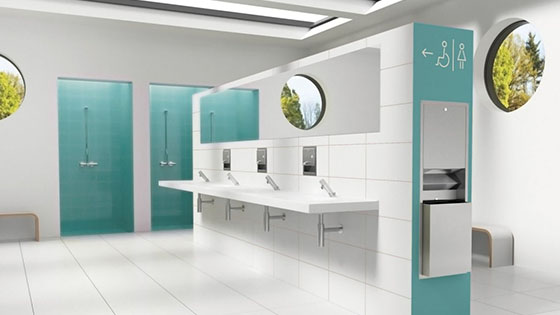 Considered design can also go a long way towards eradicating another big problem that lingers in school washrooms: bullying and intimidation.

While the grim old days of school toilets being a hotbed of bullying and harassment are mostly behind us, the washroom can still be place where children are targeted. There’s even evidence to suggest a rise in bowel and bladder complaints in certain age groups can be put down to a reluctance to use the toilet at school because it can be so intimidating.

Efforts to counter this problem in recent years have seen a move away from urinals in boys’ toilets (as recommended by the DfES ‘Toilets in Schools Guidance’ because they can contribute to Paruresis, or ‘shy bladder syndrome’) and towards unisex facilities in which it is felt a culture of bullying is less likely to take hold.

While concerns have been raised in some quarters about privacy in unisex washrooms, the vast majority of such spaces are designed with fully enclosed separate boys’ and girls’ toilet cubicles, with only hand wash facilities such as a circular washtrough or back to back washbasins in the centre of the room shared by both sexes. 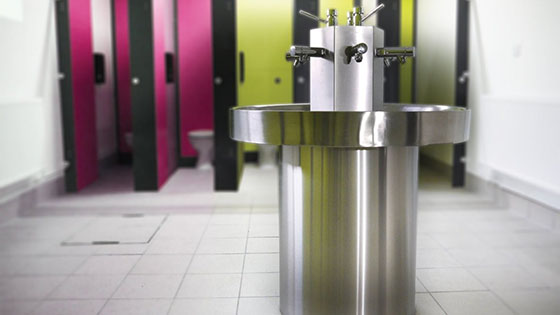 This arrangement creates fewer corners and enclosed spaces where bullies can trap their victims, and also means vulnerable children are far less likely to find themselves alone with bullies, because a unisex washroom is used by twice as many people.
Plus, it can help transgender pupils and those who don’t identify with any one gender by removing any issues around which toilet they should use.

And from a pupil management point of view, having one washroom rather than two makes supervision easier, with no need to find male or female members of staff to attend to incidents in single sex toilets.

By the time learners have progressed to further and higher education, harassment and bullying are much less of an issue to consider in washroom design. Increasingly, however they are being replaced by debates that are politicising the washroom space.
With the long tradition of inclusivity in UK higher education, it’s perhaps no surprise that many colleges and universities are now providing gender-neutral washrooms to accommodate non-binary, trans and intersex students and staff.

In some cases, this can be a straightforward matter of de-gendering existing toilet facilities with new signage. More often, however, it will mean refurbishing existing facilities to create shared spaces very much like those seen in high schools, with full-length enclosed cubicles and island hand wash facilities in the centre of the room. 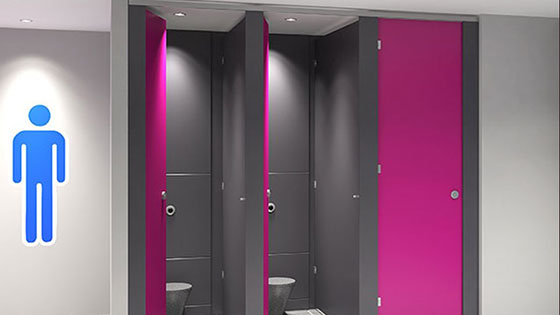 Proponents of gender-neutral toilets and changing facilities argue that they not only create a more inclusive environment for those who identify as non-binary, but benefit the student population as a whole by making toilet facilities more accessible wherever they are on campus – particularly women, who are felt to be more often affected by a lack of toilet facilities than men.

Against this view, however, some women’s groups have argued that gender-neutral washrooms are eroding what have traditionally been safe spaces for women by allowing other groups to access them. In addition, universities with a large proportion of BAME and overseas learners are having to weigh the uptake of gender-neutral facilities against the needs of some Islamic, Hindu and Orthodox Jewish women who are forbidden to share public toilet buildings with male strangers.

Of course, washroom designers can’t directly influence university policies on such matters. But being aware of the sensitivities and cultural issues surrounding the washroom can only help in the planning of facilities that are accessible, welcoming and fit for purpose.

And once those plans are approved, having access to a range of products like those from Franke that are stylish, robust and of the very highest quality can help bring them to fruition in the best possible way.

Franke Water Systems is a world-leading provider of intelligent washroom solutions to the public, semi-public and commercial sector. Franke Sissons are specialists in products for commercial washrooms and has over 200 years of experience within...
View company profile
Send Enquiry

Make an enquiry to Franke Sissons

Make an enquiry to Franke Sissons

You may also be interested in this related Product News: Specifying products for a hotel? Chrome vs stainless steel bathroom accessories [Blog] Read Now