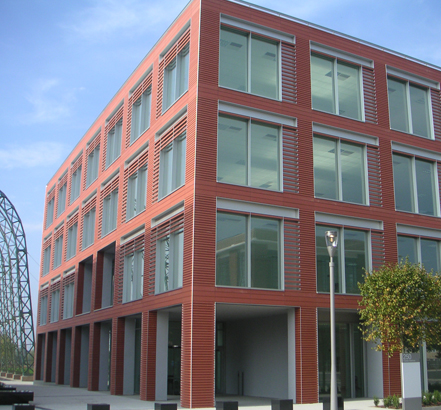 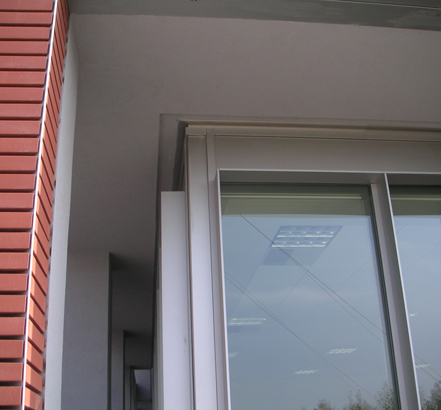 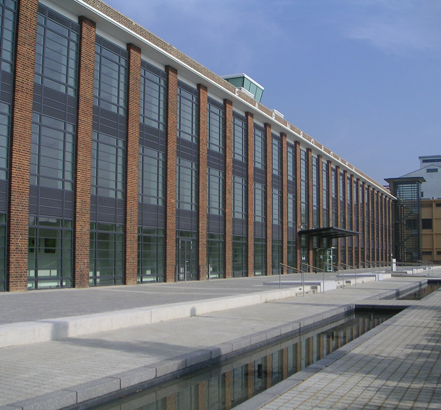 The versatility and suitability for both refurbishment and new-build projects of Schueco façade systems can be seen in three buildings in a new business park in Hampshire. Formerly owned by the Royal Aircraft Establishment, Farnborough Business Park is a 125-acre brownfield site that was bought by Slough Estates, who recognised that its rail link to London and its proximity to the M3 and Farnborough Airport, made it a prime site for development.

Five of the remaining buildings/structures, one of which is a World War 1 demountable airship hangar, are listed Grade 1 or Grade 2. This obviously meant that Slough Estates were restricted in the alterations they could make when redeveloping the site and one building in particular, known as Q134, presented a problem. Originally, Q134 had been equipped with steel windows and the local planning authority and British Heritage were adamant that the original appearance and design of these must be retained when the building was refurbished.

The system they used was a bespoke 90mm system employing the principals and components of Schueco’s FW60 system. Thanks to its narrow profile face width, the system was able to reproduce the original look of the steel windows very closely. The Schueco system also delivers excellent U values and extreme strength and rigidity. Further benefits include excellent weather-tightness and a high level of sound-proofing.

The planners, British Heritage, Slough Estates and Allies & Morrison were all delighted by the new aluminium facade and the Q134 building, now known as The Hub. The building has been entered for several renovation awards and recently won the CAB Aluminium in Renovation Award and the RIBA Conservation Award. From a commercial perspective, the building has also proved very easy to let.

The two new buildings (known as 200 and 250 Fowler Avenue) form the eastern side of a new square that has the restored airship hangar as its centrepiece. Although similar in appearance to each other, the two buildings are not identical: Building 200 has a gross external area of 4,565m2, while Building 250 is slightly smaller with an external area of 3,992m2. They have been designed as a pair of pavilions with the space between them forming part of a pedestrian route that connects the square with the newly refurbished Hub.

Both buildings employ the same sort of architectural language as the restored Hub, but have been given a contemporary feel by a cleanly symmetrical design that makes extensive use of another Schueco aluminium curtain walling system, FW60+. At ground-floor level, on the entrance and west elevations, the glass and aluminium facade has been recessed into the buildings. This allows the masonry structure to stand free where it meets the ground, thus emphasising the primary building frame. The overall impression of the buildings is that they are impressive without being ostentatious.

Widely specified across Europe, the Schueco FW60+ system is able to support glass loads of up to 5 kN, making it suitable for large module widths of 4.5m that were designed into the Farnborough buildings. Since the system is also fully compatible with insert units from Schueco’s new AWS window range, architects were given maximum scope for originality and design flexibility. Although in this instance, the system is being used solely in the vertical plane, FW60+ is also ideal for complex geometrical skylight constructions such as arcades, glass domes, pyramids and barrel vaults.

In both buildings in the Business Park, the FW60+ system includes specially-designed cover caps. The cap profile was specified in order to support the bespoke Terracotta brickette side-panels, which form a distinctive feature of both buildings.

You may also be interested in this related Case Study: Epwin Window Systems specified for refurbishment programme at Cumbria secondary school Read Now