Hamilton Litestat has unveiled its first ever USB socket

The USB socket eliminates the need for a computer from which to charge devices such as phones, cameras and MP3 players 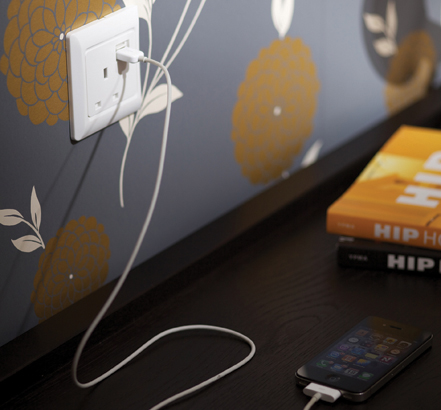 The USB socket eliminates the need for a computer from which to charge devices such as phones, cameras and MP3 players [2/3] 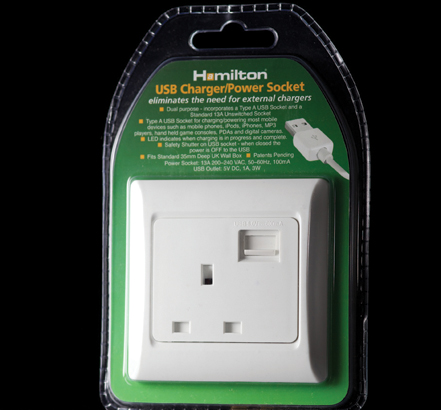 Following the announcement from the GSM Group – whose members include Nokia, LG, Samsung, Sony Ericsson and Motorola – that from January 2012 new mobile phones will be issued with a USB charger only, built in USB plates are in hot demand.

Leading supplier of decorative electrical wiring accessories and lighting controls, Hamilton Litestat, has unveiled its first ever USB socket to be launched in autumn 2010. The new socket gives hoteliers, businesses, public sector organisations and homeowners plenty of time to gear up for 2012 when USB chargers will be issued as standard.

Hamilton’s innovative new product is a wall-mounted USB socket combined with a standard 13A socket – perfect for hospitality, residential and commercial settings where USB devices need charging. From iPods to digital cameras, PDAs to mobile phones, the USB socket eliminates the need for a computer from which to charge the devices. Available in a smooth white finish, the power is only activated when a device is plugged in and a handy LED indicates when the device has finished charging, providing a safe, secure solution.

The GSM Group says that 51,000 tonnes of redundant chargers are generated every year and not only will the standardised USB charger help cut down on waste, it will also last longer and be more energy efficient, reducing annual greenhouse gas emissions by an estimated 13.6 million tonnes. The standardised charger has been approved by the International Telecommunication Union, a United Nations body, and several phone manufacturers have already started introducing it with new handsets.

“We’re launching our new USB socket now to give people plenty of time to prepare for 2012,” said Ian Hamilton, Managing Director of Hamilton Litestat. “With the London Olympics also happening in that year, we’re anticipating the product being in high demand in the hotel industry as both tourists and participants of the games will need somewhere convenient to charge not only their phones but their cameras, MP3 players and the like. We also see a large market in residential developments, hospitals, universities and offices – anywhere where users will need a quick, hassle-free way of charging their devices.

“Being energy efficient and environmentally friendly is increasingly important in our industry and we welcome moves such as this charger standardisation which will not only help conserve energy, but reduce the wastage from old electronic chargers.” Add Getting ready for 2012: Hamilton Litestat launches USB socket to your Enquiry Shortlist

You may also be interested in this related Product News: Hamilton introduces new 'Gray' finishes to an interior scheme Read Now