The location, access, and roof design of a building during any refurbishment is taken into consideration during the planning stages of all projects - but even more so when it comes to a live, airport environment.

A recent project which presented such challenges was the Radisson Blu hotel, which is located within a short walking distance of Manchester Airport. The building’s 2,800 sq. m roof had proven problematic for a number of years resulting in persistent water ingress into a number of the ‘Premium’ guestrooms and corridor areas on the top floor of the hotel. This meant the project was time critical to prevent any further issues as well as potential loss of profit for retailers.

The height of the building coupled with its location and the roof design presented many challenges for Castle Contractors NW, who were awarded the contract to undertake the roof refurbishment in conjunction with the architect’s specification.

The cold-applied liquid Kemperol 2K-PUR waterproofing from Kemper System - which is solvent free and odourless - was specified, and allowed the installation to progress with minimal disruption to the day-to-day activities of this busy commercial hotel as well the adjacent Manchester Airport Terminal 2 building.

The first challenge was to remove 2,200 concrete flags from the roof, each 50mm thick and weighing approximately 40kg. The flags covered approximately 40 per cent of the total roof area and had been used to help prevent the original EPDM rubber roof covering from lifting in high winds.

To remove these paving slabs and with Manchester Airport’s permission, a 53.5m high crane was used to lift three cages onto the roof, which were each filled with 25 flags at a time and then transferred into five large roll-on, roll off skips. In total, 76 tonnes of flags were removed, revealing the rubber membrane underneath.

Securing the membrane to the roof presented the next challenge. The flags had been installed onto plastic footings which when removed, had left square prints which were still visible across the roof. These were used as the locations for 2,600 concrete fixings each measuring 122mm long with steel spreader plates, which were installed into the roof deck providing the required resistance to wind uplift.

The next step was to wash the roof using power washers which given its size, took just over a week. Kemper System’s Kemperol 2K-PUR was applied directly to the rubber membrane using a reinforcement fleece, which is perforated as part of the production process rather than needle punched post manufacture. This makes it stronger and greatly reduces the risk of air bubbles under the fleece allowing the resin to saturate the fleece more quickly and improving the speed of application.

The waterproofing was required around extensive detailing including gutters, outlets, pipe penetrations, and structures required for a large window cleaning mechanism surrounding the roof, as well as anti-slip walkways.

Adding to the challenges, the process required the removal of very wet insulation prior to the new insulation being installed and secured using the spreader plates and fixing screws.

A large roof deck was also waterproofed which had been designed with a concave in the middle. When faced with bad weather and rain, the contractors were able to blow the water into the concaved centre area to continue the waterproofing and avoid any delays.

Further cost and time savings were achieved thanks to a two-metre safe zone and roof safety lifeline system developed by the roofing contractors. This avoided the need for costing scaffolding which could have cost over £100K and was used as an alternative to barriers which could have moved in the strong winds.

The zone was created around the centre of the roof using large cones which were screwed into some of the flags that had been kept on the roof, preventing them from blowing off. These were then placed two metres from the edge of the roof with high visibility tape between each one.

The contractors could work safely and freely to apply the waterproofing in this zone. For the final part of the installation, harnesses and long ropes were connected to the roof safety lifeline system.

The roofing contractor’s creative thinking, skill and workmanship ensured the project was a success, overcoming many challenges. The liquid waterproofing has resulted in an aesthetic and highly durable finish which will remain watertight for decades, avoiding the risk of future costly repairs and maintenance.

This project has also been shortlisted for the LRWA Awards & Gala 2022, within the Liquid Roofing Project of the Year >1000m2 category. 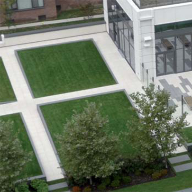 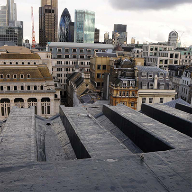 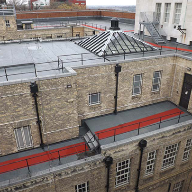 Make an enquiry to Kemper System

Make an enquiry to Kemper System