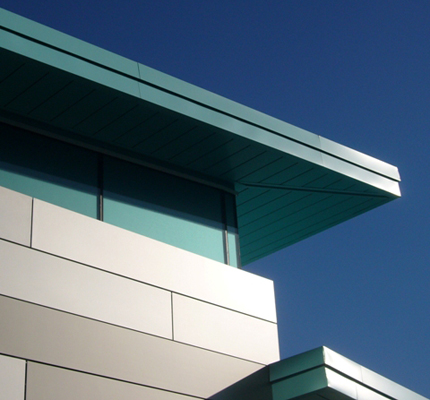 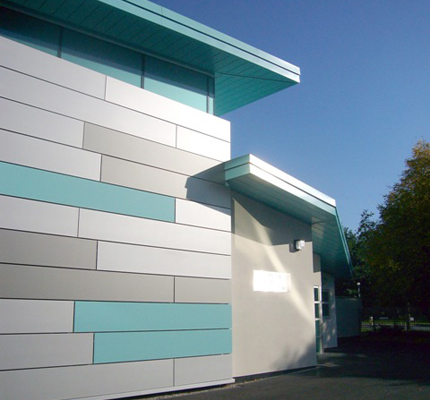 The new £1.3m Liverpool NMR Centre for structural biology houses one of the largest NMR (Nuclear Magnetic Resonance) spectrometers in the UK, a machine which enables research scientists to look at molecules at very high resolutions.

As a result of this state-of-the-art equipment, it was imperative to ensure strict control of the internal environment of the NMR Centre. Internal temperature, for example, cannot vary more than 0.1 degrees per hour.

In addition, because of the sensitivity of the magnetic equipment, part of the brief for the building was that it contained only non-ferrous materials. Wooden beams were used for the roof and glass fibre reinforcement joints were specially designed for the project.

An added benefit is the superior sustainability and high thermal performance of the aluminium-based system.

Hunter Douglas is also able to supply its panels in an infinite array of colours. In the case of the Liverpool NMR Centre, the manufacturer supplied three different colours of facade panels to help create the landmark design, which was also a core part of the brief.

In addition to the natural properties of aluminium, the advanced technology behind the QuadroClad™ system helps to maximise the thermal control and natural ventilation of the building; U-values are kept to an absolute minimum with far fewer fixings than the industry norm, which means there are far fewer cold bridges through the underlying concrete substrate.

Andrew Lee, general manager of Hunter Douglas Facade and Sun Control Systems, said: “The brief for the NMR Centre was particularly tight with regards to its practical function. QuadroClad™ was the perfect solution to meet these needs."

“But due to the flexibility of the integrated QuadroClad™ ventilated facade system, we’ve also managed to achieve an extremely eye-catching result.”

The integrated QuadroClad™ system, which can include doors, windows and louvres, as well as the facade panels, means that all elements can be integrated without any loss to the integrity of the building’s thermal performance. The frame system is even designed to support additional fixings, such as lighting, signage and balconies without additional drilling through the building’s substructure.

The Liverpool NMR Centre specialises in the study of infectious diseases, such as malaria, and is a leading centre for drug discovery.

She said: “We couldn’t have anything involved in the construction that would disrupt the magnetic equipment. It was also important that rooms were a specific size and height. As such, the staggered roof was the result of needing a very tall space in the middle of the building.

“It’s also in quite a prominent site, so the city authorities were very keen to see a landmark building created. We didn’t want to make it look boring, so I’m very pleased with the result.”

You may also be interested in this related Case Study: Heavy 3 Slate Provides The Key To Scottish Bothy’s Grand Renovation Read Now