Home / Company News /
Malibu is ready to go
Like

Malibu is ready to go 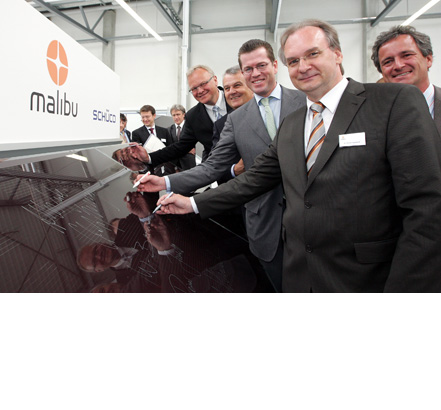 Malibu is ready to go

Germany’s Federal Minister of Economics Dr. Karl-Theodor zu Guttenberg today gave the official go-ahead for Malibu GmbH & Co. KG’s production plant to begin manufacturing novel solar thin-film modules in Sülzetal (Osterweddingen) near Magdeburg. With this investment of 100 million euros, around 120 new jobs have been created in Saxony-Anhalt, and 30 additional jobs have been created at the research and development site in Bielefeld. Malibu GmbH & Co. KG is a joint venture, with E.ON AG and Schueco International KG each holding a 50% share.

Located on the A14 autobahn in the Sülzetal (Osterweddingen) commercial area south of Magdeburg, the new factory is conveniently situated. At the thin-film production plant installed here by the global market leader Applied Materials, PV modules can be manufactured from especially large glass panels up to 5.7 m2 (2.20 x 2.60m) in size. As a result, the costs for producing solar modules are lower and the production efficiency is enhanced considerably. The plant has an annual capacity of 40 megawatts (MW).

Thin-film solar cells: a pioneering technology
Amorphous silicon is utilized in thin-film cells. Therefore – in contrast to conventional mono- and polycrystalline cells – layer thicknesses of just a few micrometers (µm) are sufficient for a solar cell and an efficiency of around 7 percent can be achieved at present. Consequently, substantial amounts of expensive raw materials can be saved. The 5.7-m2 large modules with an output of up to 460 watts per module are excellently suited for use as a façade element and thus are improving Schueco’s already strong position as market leader in the building-integrated photovoltaics (BIPV, Building Integrated PV) segment. Such modules are also being used increasingly in large installations, as the now completed initial building phase of the E.ON’s first solar park in Le Lauzet in southern France shows. In the future, solar energy will be able to be tapped worldwide in entirely new dimensions.

With innovative solar technology E.ON and Schueco are creating high-tech jobs in Germany
The partners invested around 100 million euros for the project. The production of thin-film modules in Sülzetal (Osterweddingen) near Magdeburg will be accompanied by intensive research at the Bielefeld site aimed at refining the technology. This has created about 150 highly qualified jobs and apprenticeship training positions in development, research, and production of future-oriented solar technology. The Malibu joint venture bundles the competencies of the energy provider E.ON and those of Schueco International KG, which is the market leader in glass façade technology and has occupied itself with this technology since 1951.

“The start of Malibu is a veritable milestone for Schueco and an important expansion of the solar sector. Now, in addition to manufacturing solar collectors, we will produce and constantly further develop thin-film photovoltaic modules using state-of-the-art methods. As a result, we are coming ever closer to our goal of making building-integrated photovoltaics a permanent feature of the façade,” said Dirk U. Hindrichs.

E.ON’s CEO Wulf H. Bernotat: “Photovoltaics has the potential in solar farms to generate electricity from the power of the sun in a climate-friendly way. With our involvement in the Malibu joint venture and construction of modern solar farms, we aim to enable solar energy to be used on an industrial scale. Our objective is, apart from wind power, to develop electricity from the sun into a second strong pillar of renewable energy in the E.ON energy mix. Renewable energies belong to E.ON’s core business and are an elementary component of future energy provision, in which supply security, environmental compatibility, and cost effectiveness are no longer incompatible aims.”

Said Dr. Rainer Haseloff, Minister for Economic Affairs and Employment of Saxony-Anhalt: “Saxony-Anhalt has become one of the world’s leading regions in the photovoltaics branch. Currently, one-tenth of the solar cells manufactured worldwide come from our federal state. The minds are here, as well as the know-how. Malibu GmbH’s solar module production will further strengthen Saxony-Anhalt as a solar location and enable the state to maintain its competitive edge.”

Add Malibu is ready to go to your Enquiry Shortlist