Bespoke Conservation™ timber window, installed at the University of Sheffield

Mumford & Wood, the specialist manufacturer of bespoke Conservation™ timber windows and doorsets, has supplied replacement windows in the massive renovation of the Jessops Hospital, now the music school facility of the University of Sheffield.

In 1875, a small six-bed, inadequate hospital known as the Sheffield Hospital for Women was moved to a purpose-built facility in the city centre with improved accommodation for 57 patients. The new Jessops Hospital for Women – named after the benefactor Thomas Jessop - continued to undergo numerous expansions and by the outbreak of the Second World War no less than 151 patients could be cared for. The building suffered severely during the war years but rebuilding was a speedy affair and in 1943 the new extensions and remedial work were complete. By 1978 there was provision of 239 beds and the hospital became an approved training school for midwives. In 2001 the Jessops Hospital for Women was closed and relocated again in Sheffield.

The University purchased the Grade 2 listed building with the intention to demolish the whole site but planning permission was turned down and refurbishment was undertaken to reclaim the building as the University’s music facility.

Mumford & Wood designed and supplied around 250 bespoke high performance, double glazed, acoustic Conservation™ Box Sash windows, each with a fanlight, which were specified by Carey Jones Architects of Leeds and approved by the Sheffield City Council Planning Team who work to improve the quality of Sheffield’s built environment and the protection of the City’s heritage.

The original brief for external window replacement together with secondary glazing in the rooms that overlook the pedestrian street traffic was later changed, for the sake of both aesthetics and acoustic performance, to ‘double-double-glazed windows’, that is, a double glazed unit in the external opening using acoustic glass and another double glazed unit in the internal opening separated by a 75mm cavity.

“Effectively we used a double-glazed Conservation™ Box Sash window either side of a void in the same opening which doubly contributed to the acoustic control of this fantastic music school,” says Dave Snowling, Managing Director, Mumford & Wood Ltd. “In most cases we work toward reducing unwanted noise from entering a building; in this case it is quite the reverse as we needed to trap the sound of music within the building and avoid it from escaping!”

Working closely with gasket, acoustic and glazing specialists, Mumford & Wood has developed acoustic variations for their range of premium quality windows which have been independently tested to BSEN IOS-1:1997 to achieve an audited average sound reduction of 36dB, in this case from inside to outside.

“There were other challenges in this project,” continues Dave Snowling. “The fanlights above each window, many of which were fixed, had to be individually measured to mirror the external stone corbel which was not existent in all openings making this one of our most bespoke projects. It adds considerably to time and cost but the University is delighted with the quality, sound performance, thermal efficiency and traditional aesthetics our products have contributed to this project.”

Mumford & Wood use premium quality, clear grade Larch, only from sustainable sources, in the production of their factory-finished Conservation™ windows and doorsets. They are BFRC eco-energy rated A-C, depending on size and specification, and carry Kitemark, Energy Trust and Secured by Design accreditations. Only water-based microporous paint is used on the finished product which is delivered to site with three coats as standard. A number of additional extras are available including choice of hardware, glass types and profiles. 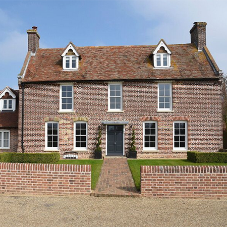 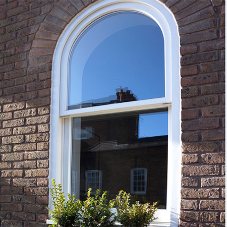 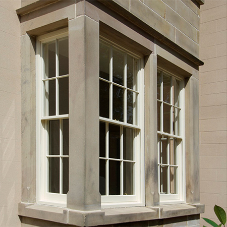 You may also be interested in this related Product News: Safe By Design Read Now