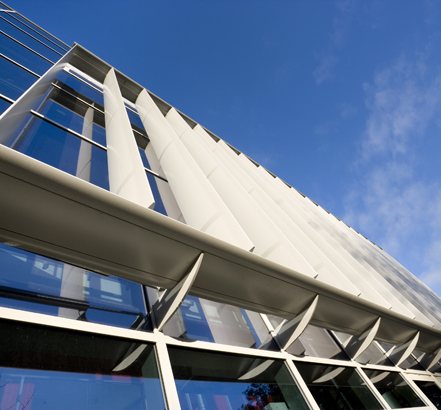 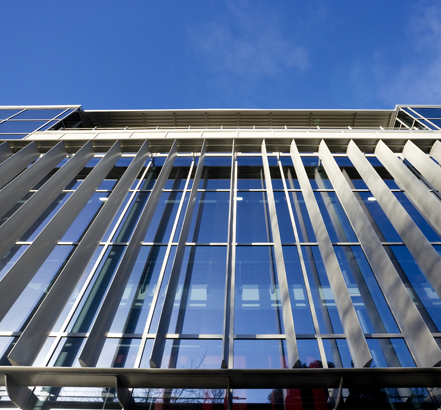 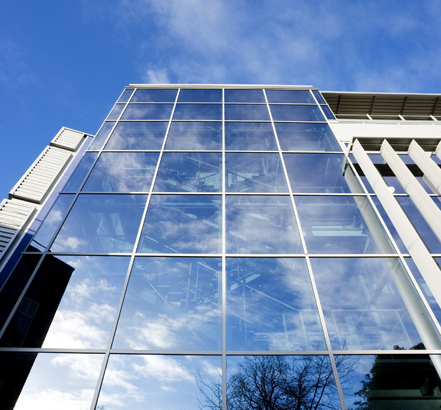 Schueco, and it’s vertical shading system, undertook it’s first UK installation at the new 2,000m2 teaching and learning block at Roehampton University in south-west London. The project showcases an innovative solution to a problem that faces many architects when designing buildings containing large areas of glass: how to minimise solar gain and avoid the use of expensive and energy-intensive air-conditioning systems.

The university’s new facility, known as the Duchesne Building, is located on a tight site between existing student residential accommodation and the students’ union. Arranged on four floors, the building provides a number of new seminar rooms, a lecture theatre with raked seating for 154 people, research areas and offices. The architectural practice in charge of the project, Devereux Architects, argued successfully that the lecture theatre should be sited on the ground floor in order to take advantage of the natural slope of the site.

In terms of design, the architects conceived the building as a series of insulated, interlocking boxes. They decided on a simple concept that places the cellular teaching rooms to the rear of the site in a solid Blue box with punched opening windows. The circulation, breakout and support areas are all contained in the front glazed box, incorporating a spectacular three-storey naturally ventilated atrium.

The front of the Duchesne Building faces due east towards the main campus gardens, hence the need to find a way of preserving the lightness and airiness of its glazed atrium, whilst simultaneously preventing its interior from overheating and inhabitants from being dazzled by the sun. Another factor was the client’s enthusiasm for the transparent quality of the facade which, in addition to allowing uninterrupted views out over the gardens, makes it possible for people outside the building to view its interior.

Thermal modelling carried out by Devereux’s M & E consultants resulted in a recommendation to specify solar control glass for the fascia panels on either side of the main atrium. The architects then considered the best method of dealing with the shading of the atrium itself and decided that vertical louvres would provide an efficient and attractive solution as conventional horizontal louvres would not have been able to deal effectively with the low angle of the early morning sun.

They then contacted the technical design team at Schueco and agreed with them the actual configuration and optimum number of blades. This led to the first installation in the UK of Schueco’s ALB vertical motorised large-louvre shading system. Although initially the architects felt that specially large louvres should be specified, Schueco’s technical specialists were able to demonstrate that standard range full-size blades, measuring 6,300mm length x 470 mm width, would be equally effective and cheaper.

The system uses sensors linked to Schueco 230 volt e-drive motors, mounted internally in the mullions. In response to the brightness of the sun and its angle of elevation, these motors continuously alter the angle of the blades to ensure effective shading whilst simultaneously allowing maximum daylight penetration. When the blades are not in direct sunlight, or when a pre-set level of sunlight has not been reached, they remain open. The result is a shading system that is remarkably responsive to human needs, extremely effective in reducing solar gain and highly efficient in its use of energy.