To create a new basis for collaboration with customers, startups and partners from science and industry, Uzwil-based technology group Bühler built a groundbreaking innovation campus.

The facade is just as technologically sophisticated as the smart building concept – the electronic all-glass SageGlass facade provides solar protection, allowing a previously unattainable level of openness and transparency in design, and contributing to the building’s unique aesthetic.

The Bühler AG innovation campus consists of two elements: the CUBIC innovation building and the adjoining application centers, which were modernized at the same as the new building.

The new campus for the Swiss technology group, which provides leading process solutions in the food, feed and mobility markets, brings together research, development, prototyping, engineering, production and education. The aim is to transform the pressing challenges faced in an era of healthy eating and clean mobility into new solutions and business.

The three-story steel frame construction of the CUBIC building appears to float above the modernized test halls. The construction rests on a two-part entrance core with connecting bridges to the high-rise buildings and the customer center. The upper floors are supported by a steel catching table.

All the supporting elements, stairways, elevators and technology in the building concentrate on three concrete cores, which, together with the three courtyards and three double-story halls, form the core of the building. Around this core, open office environments span two floors, providing maximum flexibility and full contact with the communal areas in the center of the CUBIC building.

With its industrial atmosphere, the workshop effect was chosen deliberately: the CUBIC building is a space for collaborative research and development, a state-of-the-art co-working space for the project teams of Bühler staff, startups, customers, industry partners and university teams.

For the floor plan, architect Carlos Martinez drew inspiration from the image of a centrifuge: the ideas developed collaboratively in the core are “catapulted” into the outer office areas, where they are fleshed out by small and large work units. The results are then taken back into the auditoriums in the center for presentation, so that they can be tested on prototypes and models in the maker space at a later stage, before receiving the finishing touches in the ring of offices.

Even in the first drafts, a smooth glass shell was planned for the façade of the CUBIC building, designed to convey the concept of openness outwards, too. The curtain facade of large glass elements measuring 3 ft 7 in x 10 ft is supported by an internal frame construction, which is connected to the building’s support structure with brackets.

A third of the 535 glass elements were designed as opening elements. The swinging elements can be opened automatically for ventilation and smoke extraction in the event of a fire. The exterior view of the all-glass surface has a uniform, delicate appearance and is divided only by thin joints between the glass elements. This facade design was used on all the vertical facades, including in the three courtyards.

The structural glazing facade was built using Vario solar protection glass by SageGlass.
Thanks to its tinting electrochromic coating, the smart glass can control the heat influx from sunlight – all while staying transparent and offering an unobstructed view of the outdoors.

The SageGlass Vario system is a certified design variant for challenging all-glass facade applications. Even in bright conditions, the coating on the inside of the glass blocks heat from the sun before it enters the building. The CUBIC building required no external solar protection as a result.

To maximize the flexibility of the space, the facade was divided into small sections. Two of each of the triple-glazed elements form a zone that can be tinted individually. This is important for controlling the solar protection, as the building’s facades are shaded to varying degrees by the neighboring buildings.

Areas can also be reallocated when the room layout is changed to support flexible use of space. The facade tinting system is linked via a BACnet interface to the internal building management system, which is used to monitor and manage the entire building. In addition to automatic tinting via sensors that respond directly to changes in sunlight, the facade at the CUBIC building can also be controlled individually with touch panels.

When the sun shines, the facade darkens, constantly changing its appearance. A major advantage of SageGlass is its constant ability to react to its surroundings, even when tinted. This is much more beneficial to the employees in the building compared with internal or external solar protection. Moreover, the transition between the different tint levels is smooth and completely silent, preventing any disruption of operations. 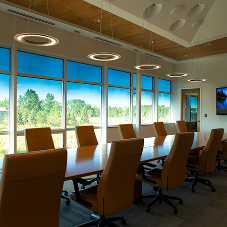 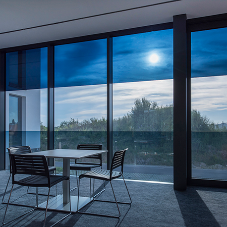 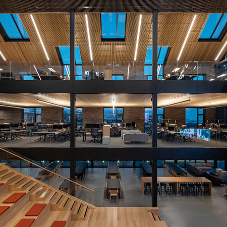 Make an enquiry to SageGlass

Make an enquiry to SageGlass