Swedbank arena for football, concerts, and other events in the Nordic region 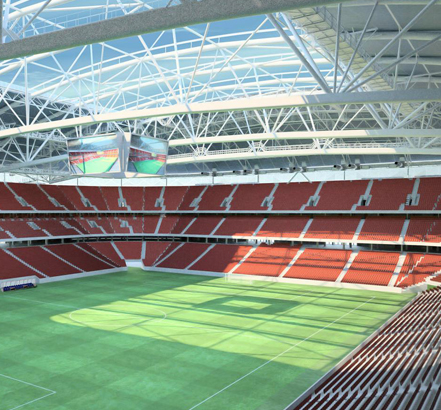 Swedbank arena for football, concerts, and other events in the Nordic region [2/2]
Send Enquiry

Fläkt Woods is supplying the air-handling requirements for the new Swedbank football arena in Stockholm, Sweden, which will provide all year round football facilities, with room for 50,000 spectators.

Featuring a retractable roof, with heating and air handling, the new stadium is planned to be ready for the 2011-2012 season, and is set to be one of the largest and most modern arenas for football, concerts, and other events in the Nordic region.

Fläkt Woods has received the prestigious order to supply air-handling units. The Company will deliver 25 eQ and EU units and 40 air-supply fans, which will ensure excellent air quality. Within the arena, air can also be heated by a number of circulation units.

“To be selected on this, Sweden's new national arena is a superb endorsement of our new eQ units” says Anne-Marie von Salis, Fläkt Woods District Manager in Stockholm. She also sees good opportunities to supply ventilation to the upcoming expansion of the new buildings around the arena.

The stadium will be characterised by its flexibility. It will be possible to change the surface of the pitch between, for example, grass, ice and gravel. It will also become an ideal venue for major concerts, with a capacity for 65,000. One unique feature is located in the roof surface, where a system of mounting points will provide short lead times and the opportunity to rig the most varied stage designs.

At full capacity, the stadium will put big demands on communications around the area and therefore, the Solna centrum metro station and shopping mall will be built with a new entrance. In future there will also be a new tramway, and 4,000 parking spaces are under construction. The designers have promised that trains, metro and bus transportations will be swift and easy, making it possible for one third of the people who live in Sweden to get to the arena within 90 minutes.

The arena's façade is composed of triangular elements with three different degrees of surface treatment, so that the light will reflect differently depending on the time of day, weather and season. Internal illumination will vary between subtle, when the stadium is not crowded, to spectacular lighting effects when major events are taking place.

Environmental awareness around the project has been a high priority, the area will also use waste heat from the stadium for residential heating and sole use of renewable energy. A team has also started to look at the possibility of converting waste into compostable vehicle fuel.

You may also be interested in this related Case Study: Pale Ash Floor for Renovation Of Regency Villa Read Now