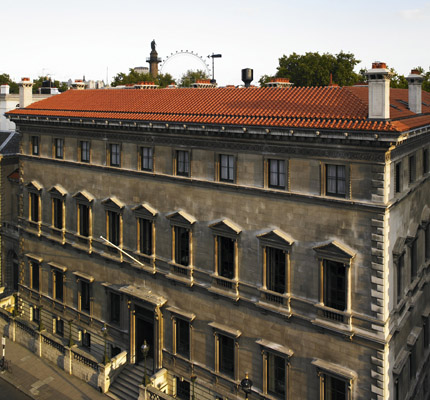 As a leading manufacturer of roof tile systems, Sandtoft Roof Tiles has recently extended its impressive track record with the successful delivery of yet another landmark project. The project, which was undertaken by the company’s specialist Heritage service, entailed the transformation of a roof at one of the Capital’s most prestigious addresses, The Reform Club at 104 -105 Pall Mall.

Whilst today performing a purely social function, the Reform Club was originally created in 1836 to bring together supporters of the Great Reform Act of 1832. During these early days, the Club’s founders commissioned one of the leading architects of the period, Charles Barry, to create a clubhouse. The same architect was also responsible for what is quite possibly Britain’s most famous landmark – The Houses of Parliament.

The resulting Reform Club building still represents one of the finest examples of Victorian architecture in the country and has remained largely unchanged since its construction was completed in 1841. In his design, Barry was heavily inspired by the Italian Renaissance architecture he absorbed as a young student in Rome. Bearing a marked resemblance to Michelangelo’s Palazzo Farnese, the building is both imposing and palatial. So much so in fact, that Jules Verne chose to feature it in his novel ‘Around the World in Eighty Days’ whilst more recently it was used as the setting for the famous fencing scene in the James Bond film ‘Die Another Day’.

By 2005, time and the great British weather had taken their toll and the club required re-roofing. Considering the building’s architectural pedigree, the architects responsible for this new project knew only one company could provide the products, craftsmanship and technical expertise they needed – Sandtoft Roof Tiles.

With a history stretching back 100 years, Sandtoft is the UK's largest independent roof tile manufacturer. Its specialist Heritage service focuses on the creation of bespoke tiles and fittings for conservation and restoration projects, employing a team of craftsmen who combine generations of experience with 21st-century technology to reproduce historic roofing products.

For this particular project, Sandtoft responded to the architect’s brief by providing a new Italian terracotta roof to replace the original slate and lead roof. Thanks to the quality of the materials used and a strong design focus, which manifests itself in all the company’s products, the new roof actually surpasses the impressive aesthetics of the original, whilst delivering improved functionality.

Speaking of the roofing materials used, the project’s architect, Paul Vonberg of Paul Vonberg Architects, said: “Considering the architectural standing of this building, Sandtoft’s products had a lot to live up to. I am happy to say they more than surpassed the required specification in terms of their quality and their ability to complement and maintain the strong design of the Reform Club.”

Sandtoft Roof Tiles' Sales and Marketing Director, Nick Oldridge, added: “Sandtoft is delighted to have been involved in this high-profile undertaking. Our Heritage service has a long track record of working on such prestigious roofs and serves as a good indication of our wider capabilities.”

“The same technical expertise, attention to detail, deep seated understanding of roofing and unflinching commitment to quality that allows us to supply products to a project of this nature is also used to meet the needs of less high-profile, but equally important, projects –  day in and day out.”


Add to Project Board

You may also be interested in this related Case Study: CUPACLAD PROVIDES THE NATURAL SOLUTION FOR NEW COASTAL HOME Read Now