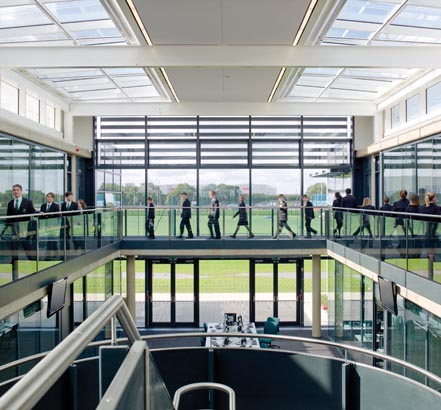 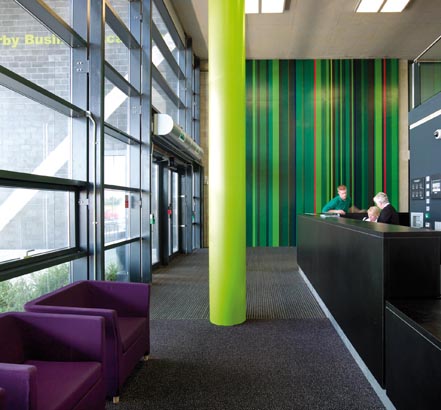 The new £30 million Corby Business Academy is the very essence of a 21st century building. Designed by the award-winning architectural practice of Foster + Partners, it provides its 1,200 pupils with a pleasing, modern environment in which glass is used to great effect both outside and in. The result is an exterior that is undeniably impressive with clean, almost sculptural lines and an interior that is light, airy and welcoming with very few dark, concealed corners.

The academy is organised into five faculties and the building reflects this. It is a long, two-storey street with central-corridor arms each side, separated by linear open-ended light-wells. Lavatories, private study spaces and mini light-wells are grouped at the end of each wing. There is a big assembly hall at one end, balanced by a gym at the other. The visibility provided by large areas of glass is seen as a positive advantage in terms of encouraging interaction between pupils and staff.

The specialist contractors chosen to work on this project were H W Architectural Ltd of Brighouse, West Yorkshire, a company that has been trading for over a century with experience of, and expertise in, both aluminium and steel systems. The specification for the Corby Academy was determined by the architects themselves who are well acquainted with Schueco and with whom the company enjoys an excellent working relationship. That said, Foster’s approach is always dictated by the nature of the job they are working on, with their specification being drawn up to reflect the precise requirements of a particular project.

In this instance, there were many technical reasons for choosing a Schueco system; for example, Schueco FW60+SG was specified for the roof glazing because Foster’s design allowed for no external capping members and the system’s structural silicon joints permitted unrestricted water run-off from the high-level roof-glazed areas.

Overall, five different Schueco systems were utilised: FW60+SG for the high-level roof lights; FW60+ for the low-level roof lights and external curtain wall areas; FW50+ for the internal screens and AWS 50 windows for the light wells. In addition, AWS 102 concealed ventilators were fitted as part of a certified smoke and heat exhaust ventilation system. The total value of the 32 week contract for HWA was in excess of £2.7 million, making it one of the company's largest projects yet using Schueco systems.

According to Howard Sykes, HWA's Technical Sales Director, the contract ran very smoothly not only because Schueco systems had already been supplied by the architects, but also because, thanks to main contractor Wates, the Corby site was exceptionally well managed.

One further factor proved crucial, as Howard explains: “Wates invited us to organise a workshop for the site management team and for other site managers in the area. This allowed us to explain one or two technical issues relating to the curtain walling, but more importantly gave us the opportunity to look at specific issues in terms of detailing, sequencing and installation. This helped us enormously when we finally got on site.”

HWA also found it reassuring to know that they could call on Schueco’s technical expertise if necessary and in fact Schueco personnel visited the company’s Brighouse headquarters on a number of occasions when HWA technicians were seeking solutions to specific design problems. These included the need for transoms on the north and south elevations to span 3.6m, quite an exceptional length. In addition, the transoms themselves were loaded with ventilators above the span and therefore needed to be further strengthened if they were to take the extra weight. The eventual solution consisted of introducing a series of hangers and props that were arranged to provide the necessary support without being visually intrusive.

The Corby Business Academy took just seven months to build with completion on site in August 2008. For a building with a gross internal floor area of 11,600 sq metres, this is, by any standards, a fast-track project and there can be little doubt that Schueco's systems helped to keep the construction timetable on track. In terms of the effectiveness of the building's open-plan design, teachers at the Academy report that the pupils, most of whom come from existing Corby schools, are already behaving noticeably better.