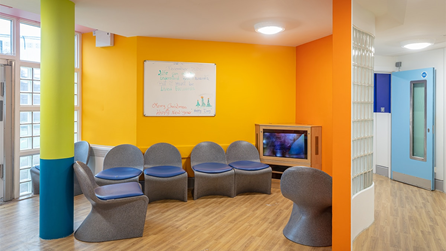 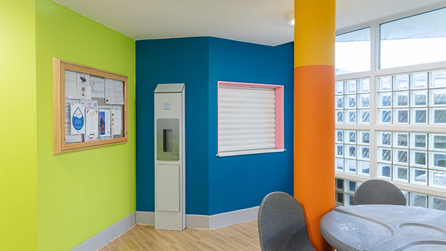 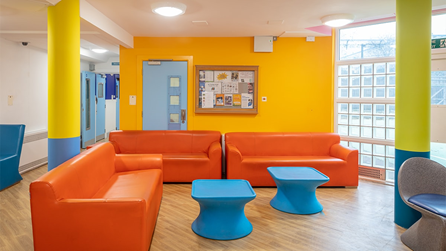 Caspian Ward is a psychiatric intensive care unit at Park Royal Mental Health Centre. It provides mental health care and treatment for people whose acute distress, absconding risk, and suicidal or challenging behaviour needs a secure environment beyond that which can normally be provided on an open psychiatric ward.

Dulux Decorator Centre lends a helping hand
The Dulux Decorator Centre at Staples Corner, London provided support for the redecoration by supplying all the paint, as well as specifying which products to use. The work was carried out to the highest standard by painting contractors, Altered Images - West London account.

Dulux Trade Scuffshield Matt was used on the main areas of the ward to ensure designs were low sheen and remained resilient and free from any scuffs or marks that might happen during busy shifts with plenty of activity from visitors, staff and patients.

Its hard-wearing formulation will help drive down long-term redecorating costs as it needs to only be reapplied every eight years. It also eliminates the need for touch-ups as marks and scuffs can be easily removed by prompt cleaning.

Strong blocks of colour were used in a bid to make the site less institutional and more welcoming - as part of The Nightingale Project’s mission to ensure that stressful conversations about health shouldn’t take place in stark, institutional environments.

Dr Nick Rhodes, Director of The Nightingale Project, said:
“Like many NHS units, this ward’s interior design has not been prioritised over the years, and the patients and hard-working staff had been used to an environment that was stark and institutional”.

“With the designers on board we left behind the typical NHS off-white corridors and implemented a bold and vibrant nine-colour scheme”.

“The idea was that in each area - the dining room, the sitting area, the recreation room, the de-escalation room and the corridors - several of the colours from the palette would be used in different and unusual combinations, creating different effects in each space through the way that the colours played off each other”.

“The patients have commented that the effect makes their ward ‘feel less like a hospital’ - this is a key achievement because patients sometimes spend an extended period in hospital and it’s important to make it feel less clinical in order to assist in their psychological recovery”.

“The colours used in the interior can be invigorating, creating what the Nightingale Project has called ‘the anti-depressant environment’, which in turn reflects the fact that our mental health is affected by many factors in our lives including the physical environment we inhabit”.

“Design and colour can, in other words, be health giving; the environment is part of the treatment”.

“Our collaboration with Dulux included some detailed work sourcing the exact shades of colour that the designers required for the space; the team worked closely with Harry and Jen to home in on the right shade of blue from their database for the corridors, for example”.

“Dulux Decorator Centre were kind enough to donate the paint used in the ward, to keep the charity’s costs low”.

Dulux Decorator Centre also provided technical input by advising which paint products were best suited for the ward’s redesign, as well as working with the Staples Corner team to mix paint to required colours and picking up or delivering the paint to the ward.

Paul Lawrence, Senior Technical Support Manager at Dulux Decorator Centre said:
“We viewed the ward, understood which colours were to be used and then put together a technical specification for the contractors to follow and that's when we utilised products like the newly-launched Dulux Scuffshield”.

“Performance and looking good for longer was a priority, hence why Dulux Trade Scuffshield Matt sat really well as it’s a super-durable emulsion product for the walls which will keep things looking good for a long time.”

Andrew Cleaver, National Sector Manager at Dulux Decorator Centre, said:
“The Nightingale Project is doing such outstanding work at making NHS buildings and wards pleasant spaces to be for staff, patients and visitors”.

“Using the correct paint for this type of work is crucial. It’s really important to take into account the finish of the paint for the area and the patients which, in this case, meant using a highly durable matt finish”.

“Dulux Trade Scuffshield Matt fitted the bill perfectly for the main areas of the ward as, not only is it low sheen, but it is ideal for keeping high traffic areas looking good for a long time thanks to its durability. We totally support the ethos that the environment itself should also be considered part of the therapy within healthcare spaces, and that’s why we’ve created a range of evidence-based colour schemes that support the Procure22 Construction Framework, where schemes for Mental Health wards can also be accessed”.

“We are also incredibly proud of the work our Dulux Decorator Centre in Staples Corner has done for such a deserving cause.”

Dulux Trade is renowned for quality. With close to 100 years of innovation, there are paint products to suit any environment and budget. And with the industry’s largest sales team offering national coverage, they are able to give advice on the best...
View company profile
Send Enquiry 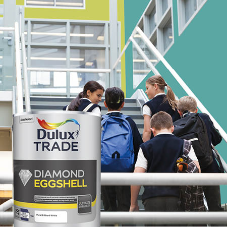 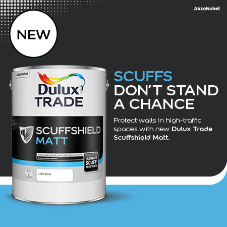 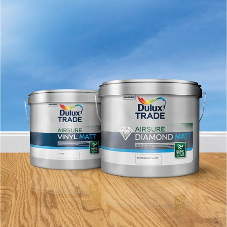 Make an enquiry to Dulux Trade

Make an enquiry to Dulux Trade

You may also be interested in this related Case Study: London Olympia Coated with Dulux Trade Diamond Eggshell Read Now