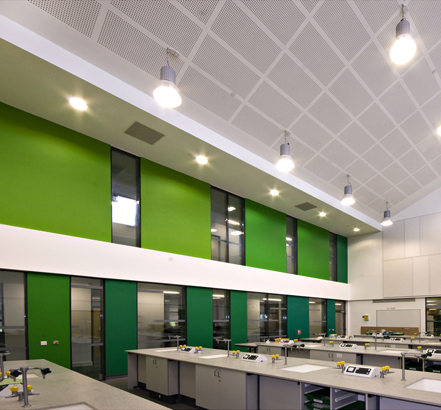 High-performance walls and ceilings featuring plasterboard and related systems from Knauf Drywall help to create a quality learning environment in a newly built secondary school in north Somerset. The £29 million One School Pathfinder project, part of the Building Schools for the Future (BSF) programme, gives Nailsea School attractive and functional new surroundings for its role as a technology and media arts college, and benchmarks future BSF projects in the county. Knauf Drywall’s systems, installed by Optimum Drywall, set acoustic – and some aesthetic – standards for the new school.

The steel-framed, two-storey school adjoins the former comprehensive school buildings which are being demolished to provide space for a new car park and playing fields. Main contractor Carillion began work on the new school in May 2008, on the original playing fields, with the start of the 2009/10 academic year as target opening date. Clad with brick and coloured panels, the new building accommodates some 1,500 students and staff.

In Nailsea School’s wet areas, such as changing room showers, ceramic tiles are mounted on Knauf Aquapanel Tile Backer Board. This incredibly strong 12.5mm fibre reinforced cement board is used just like plasterboard and is designed especially for wet areas, where it supports tiling up to 50kg/m2, and virtually eliminates any risk of tile failures.

Founded 10 years ago, Optimum Drywall has become one of the South West’s leading providers of quality drywall partitions, suspended ceilings and other internal works. Based in Bristol, the company also has a branch in Cardiff.

Make an enquiry to Knauf Drywall

Make an enquiry to Knauf Drywall

You may also be interested in this related Case Study: Social distancing screens provided by Westgate for Scottish contractor Read Now