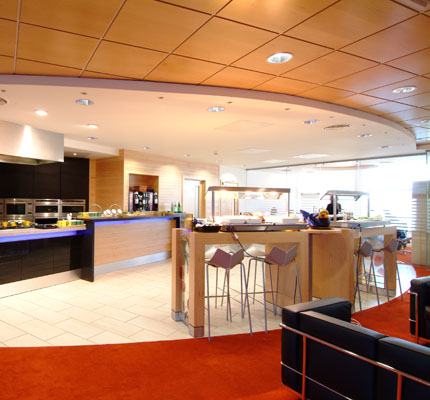 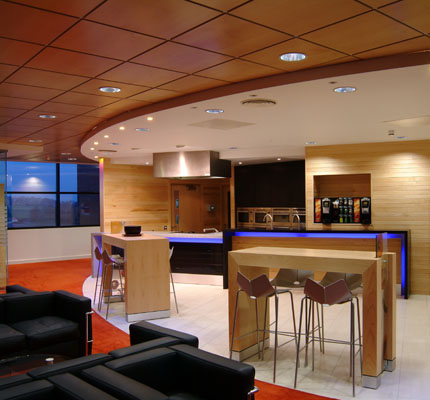 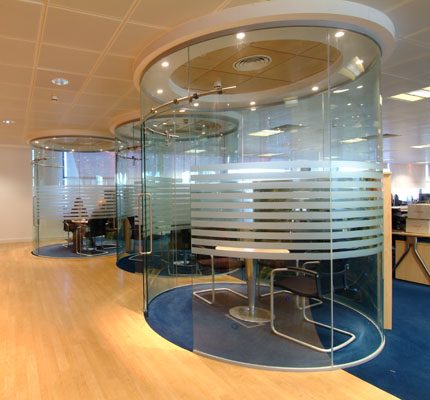 Northern Foods started out in the 19th century as a small dairy import/export business in Hull, and has since grown to be one of the country’s leading food producers, running operations from 19 different locations in UK and Ireland.  In addition to producing well-known, brand-name foods such as Dalepak and Goodfellas, the company also provides a number of own label products to top supermarkets including Tesco, Marks and Spencer and Sainsbury’s.

With office locations spread across the north of England, Northern Foods wanted a new company headquarters, a touchdown hub that was easily accessible to all employees, regardless of their location.  Originally based in Hull, the company decided to move to Leeds because of its excellent motorway connections and more central location.

As the company’s UK headquarters, Northern Foods wanted its new building to be spectacular both inside and out. Carey Jones Architects were responsible for the design of the new premises, with its sister company, Carey Jones Interiors, looking after the internal finishes. On a functional level, it was to consist of an open-plan office space which could be changed as necessary, with dedicated areas for food preparation and presentation for clients and visitors.  From a design point of view, the brief was to ‘make it sexy’, incorporating a Scandinavian concept and themed graphics to keep it in line with the company’s day-to-day activity and cross-border operations.

Carey Jones Interiors wanted to install an integrated plaster, timber and metal ceiling system into the building for both lighting and aesthetic purposes. After looking at a number of other ceiling systems, they chose Armstrong World Industries as the supplier for the project as it was the only company who could meet the material requirements.

Armstrong’s ceiling tiles and grids were to be used throughout the entire building.  The designers chose to install a number of different styles and types, depending on the aesthetic and functional requirements of each specific area, a total of 2,406m2.  Darren Newby, Project Director, Carey Jones Interiors, said, “The office space was to be split up and used for a number of different purposes, so we needed tiles that were going to be suitable for each of the areas. For example, in the open plan meeting space we used plain MicroLook Madera wooden tiles, which look great and are excellent for sound attenuation. This is particularly important here as there are several small meeting pods located throughout, and the tiles prevent colleagues in the surrounding areas hearing and being disturbed by others’ conversations.  We also used these in the food preparation area as they are easy to maintain and keep clean."

“Then, in the main office area and large meeting rooms, we used metal Orcal MicroLook tiles for their acoustic and light reflecting properties to make a more comfortable working environment. The fact that they have been tested to meet a number of different fire-test classifications is also good for a large office,” Newby continued.  “There is such a wide range of products available from Armstrong that we were able to perfectly match the requirements of each separate space.”

The project began in November 2004, and Northern Foods moved into their new headquarters on 28th February 2005.

Since its completion, the project has won the 2006 British Council for Offices ‘Fit-out of Workplace (large projects) Award’ in both the regional and the national categories.  The judging process considers a number of factors when it comes to assessing each individual project.

The key criteria the judges look at are:
- Sustainability (socially, economically and environmentally).
- Effectiveness as a place to do business.
- Degree to which others could benefit by adopting ideas from the project into future work.

Mark Whitby, BCO Awards Chairman, says: “A BCO Award is the gold standard of excellence and awarded following a rigorous judging process that involves entrants hosting visits from regional and national panels.  Winning an award is a great testament to a client’s vision and tenacity and a huge reward for the work of their team.”

On winning the award, Darren Newby said, “We are delighted that the work we have carried out has been recognised.  It’s a good feeling to know that you have been a part of something like this and that, as well as creating a building that is a great place to work and visit for the Northern Foods staff and clients, is also worthy of winning a national BCO Award.”


Add to Project Board

Zentia, formerly Armstrong Ceiling Solutions is a worldwide leader in the manufacture and marketing of acoustic ceilings and suspension systems for commercial applications. After more than a century, Zentia remains a foremost name in the ceilings...
View company profile
Send Enquiry

Make an enquiry to Zentia

Make an enquiry to Zentia

You may also be interested in this related Case Study: Zentia ceilings help a Welsh school to evolve Read Now