The World Cup is a massive global event, and it is seen as an honour for any country to be selected to host such an occasion. For the hosts, years of planning and millions of pounds are spent making sure everything goes smoothly when the big kick off arrives. Issues such as airport facilities, public transport, hotels and infrastructure are scrutinised to ensure they are up to scratch to cope with the floods of people from across the world who want to be a part of it all.

But perhaps the most expensive and time consuming aspect of any World Cup is the stadiums. They are seen as representative of the country, and some of the grounds are often remembered more than the games themselves. But what happens when the trophy has been lifted and flags put away? I decided to take a look at the most recent World Cups, to see if a legacy has been left, and if there are any lessons to be learned for future events.

South Africa 2010
There was great fanfare when the hosts for the 2010 World Cup were announced as South Africa. The competition had never taken place in Africa before, and the first emotions that came with the announcement were excitement, intrigue and anticipation. However as time passed, pressing questions began to be asked. Are the current stadiums ready? Are they big enough? Surely they won’t be rebuilt in time? How much will the new stadiums cost?

Mix this in with the fact that poverty is high in the country, resentment began to rise at the cost of building new stadiums. The message given to allay these fears was that a legacy would be created; these stadiums would become a symbol of the cities in which they are located. They would be reused and bring massive benefits to local communities. So 8 years on, is this the case?

I would argue that unfortunately, as well as the stadiums performed during the tournament, they are now somewhat of an afterthought. Danny Jordaan, the man who ran South Africa’s World Cup, concedes that the Nelspruit stadium, which incidentally cost three times the initial estimate, still represents a “huge challenge”. Geen Point in Cape Town is a prime example of a stadium being constructed without the future in mind. Its location is magnificent, with table mountain providing a stunning backdrop, giving broadcasters such as the BBC an iconic image when Gary Lineker discusses how rubbish England have been again. But the local people are not avid football fans, and it is not used. This, as with most of the Stadiums from South Africa, are just seen as empty expensive buildings, with no use to the local communities who were promised so much when they were being constructed. So what can we learn from this going forward?

Brazil 2014
During the 2014 World Cup in Brazil, the idea of building new, expensive, vast stadiums was a very controversial and sensitive subject with the local people. The football extravaganza took place against a backdrop of protests and discontent at what many felt was wasted money. Brazil spent an eye watering £11billion on the tournament, including building 12 new stadiums throughout the country. The stadium Amazonia cost a staggering £270million alone, and hasn't been used since, is that money well spent? Former mayor of Rio De Janeiro, Eduardo Paes, said after the tournament: "When I look back on the 2014 World Cup, it is not good. Brazilians have not benefited from the tournament. There has been no legacy for them. The World Cup still makes them angry. There is regret that we even staged it." 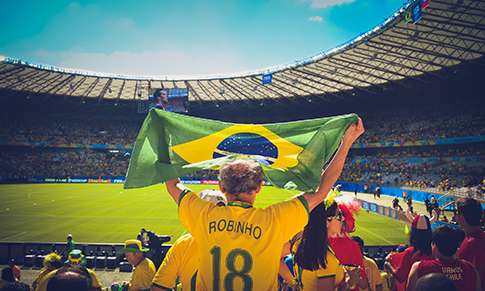 Looking ahead to Russia 2018, lessons learned?
As we approach another World Cup this summer, similar questions are being asked in regards to large empty stadiums becoming obsolete. One of the stadiums that will be used in Russia, the Kazan Arena, is a particular worry. The stadium capacity is 45,000 and comes with a huge price tag. The local football team who will occupy the stadium, Rubin Kazan, recently drew an attendance of just 3,041, as you can imagine, there were more than just a few empty seats. Kazan is a city with a population of more than a million people but football just hasn't caught on there. It is more than likely the stadium will drain resources post World Cup.

It would seem that to those people that choose be part of the bidding process to host World Cups, the sole focus is on delivering glamorous, stunning, expensive stadiums that may seem fantastic at the time, but quickly become a burden when the dust settles. It fits in perfectly with the here and now culture, to try and obtain instant gratification. One only has to look at what has become of the London Stadium. So much was made about creating a legacy after the London Olympics. It would be safe to say it has been a less than smooth transition since West Ham have moved in and it has been transformed into a football stadium. 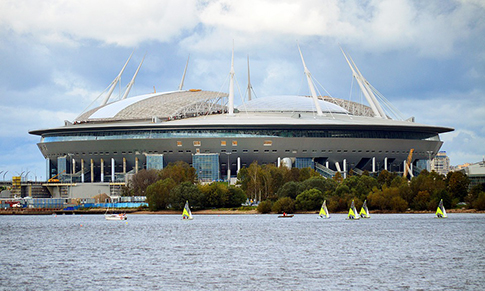 What do you feel should be done to make a lasting legacy once the World Cup finishes?

Find out more on our Sports Construction Hub.