With sustainability and energy efficiency high on the list of desirable features for construction projects, green roofs are becoming increasingly popular. We have taken data provided by Barbour ABI to look at planning applications submitted in the UK in 2016, which contained a requirement for a green roof. This has been broken down by sector and region, with some interesting results.

As sustainable and energy efficient construction continues to rise, the number of planning applications for green roofs across Great Britain in 2016 surged by 34 per cent compared to the figures registered in 2015.

According to recent data published today by Barbour Product Search, it was the southern regions of England that dominated green roof applications in 2016, accounting for 65 per cent of the total. Regionally, London accounted for the highest number of applications with 266 in the year (see figure 1.1). 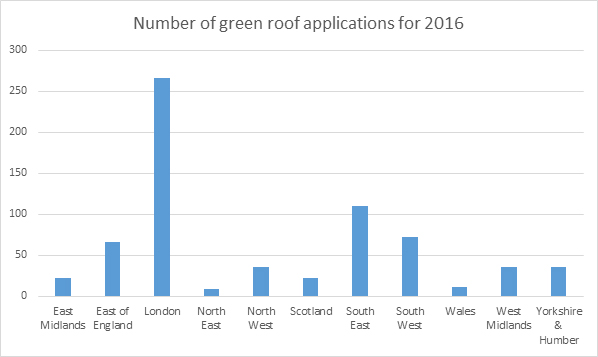 It is interesting to consider why this may be the case. Firstly, there has been a concerted effort in recent times to make cities greener, indeed 47 percent of London is green space. This could account for the high volume of applications submitted for projects in the London area looking to incorporate a green roof. Aesthetically, people may want to see green spread across a city, rather than an array of concrete grey roofs which could dominate the skyline.

Furthermore, we must also consider the spread of wealth throughout the country. It is predominately more expensive to buy properties and build new projects in the South, than it is in the North. Consequently, residents in the South may have a larger income, and thus more flexibility to add a green roof to their property, instead of opting for a cheaper alternative.

Space may be another factor in the disparity of applications. Towns and cities in the Northern regions are generally built up, with not much space and rural countryside available for new projects to spring up. However, Southern regions generally have more of a countryside feel to them. Hence we are seeing far more applications for green roofs for the South then we are for the North.

There could be several factors explaining this big difference. Is it purely financial reasons? Or Is the North too built up and lacking space? Is the country London –centric, with people even suggesting it should one day become a national park? What do you think are the main reasons for this latest North/South divide?

Across all the construction sectors it was housing that generated the most green roof applications in 2016, with 42 per cent of the total, almost three times the amount from the second placed commercial & retail sector.

Until last year, applications for green roofs had been stagnant since 2013. The boost in application numbers has been linked to a number of factors such as biodiversity awareness, environmental effects and the potential financial benefits from installing a green roof.

This 1.7 million sq ft Edinburgh St James scheme will see the 1970s shopping centre currently on site replaced with 850,000 sq ft of retail space, a luxury hotel, up to 150 new homes, 30 restaurants and a multi-screen cinema. The green roof aspect will come for residential part of the project, coinciding with the data showing the residential sector as the most popular for green roof applications on the last year. The project expects to achieve an excellent BREEAM rated status.

Showing a project located in the North West, ‘The Hive’ youth zone will be a purpose-built facility for the city’s young people aged 8 – 19, and up to 25 for those with disabilities. As well as utilising solar panels and pv panels, it will have a sedum roof as it aims become a very sustainable building. It is expected to achieve a BREEAM very good status.